“The Indians and English use them much, boyling them with Sugar for Sauce to eat with their Meat, and it is a delicious sauce.” ~John Josselyn 1663

Cranberries are harvested during the months of September to November. They can be frozen for up to nine months, and they can be used in recipes without thawing.

Due to the availability of fresh cranberries, the fall is when we see a lot of cranberry recipes. One of my favorites is cranberry bread. I particularly like to make this bread at Christmas because of the beautiful red color.
My favorite recipe for Cranberry Nut Bread comes from Cook’s Illustrated. This bread is moist and not overly sweet so that the tartness of the berries shines through. 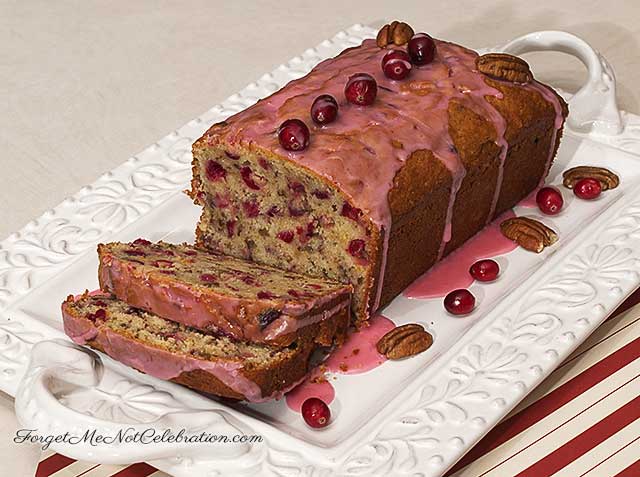 In a small bowl whisk together the two ingredients. Adjust the consistency of the glaze (it should be pourable) by adding or subtracting the amount of juice used.
Drizzle the glaze over the top of the bread and garnish with fresh cranberries and whole pecans.

Patricia Rio
This entry was posted in Desserts. Bookmark the permalink.