“Let there be work, bread, water and salt for all.” ~ Nelson Mandela

The many varieties of salt

Salt, a mineral known as halite, comes from sea water or rock salt. It played a critical role, from the beginning of civilization, as a food preservative.  Salt was so precious to the early Greeks, Hebrews and Romans that special roads were built to transport the salt.  The Via Salaria is a famous road that leads from Rome to the Adriatic Sea.

The organic food movement, which began in the 1980’s, has increased our awareness about the sources of our food.  Quality, flavor and taste have taken on a much greater significance, thus providing the opportunity for the exponential growth in salt varieties.

When researching for this post, I discovered a wonderful book entitled Salted by Mark Bitterman. His enthusiasm jumps off the pages as he describes this mineral. At one point, Mark states that salt “does more to enhance flavor than any other ingredient.” 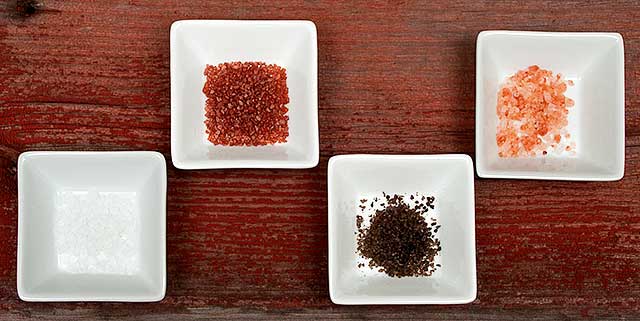 Mark Bitterman and his wife own and operate a nationally renowned artisan salt and chocolate store, called The Meadow, in Portland Oregon. Below is a list of some of the well-known salt categories that are referred to in his encyclopedic book.

Fleur de Sel – is made by evaporating sea water in open “salt pans.” After the evaporation process, the salt is raked off the top of the pan. This is the king of salt; and it is a wonderful everyday finishing salt for any food.

Sel Gris – is the salt that is on the bottom of the “salt pan” as referenced in the above paragraph. This is a great finishing salt for beef steaks, beef and pork roasts, and hearty vegetable dishes.

Traditional salts – these are fire evaporated salts such as the Alaea volcanic and black lava sea salts. They are an everyday finishing salt that adds intense color and flavor to a dish. 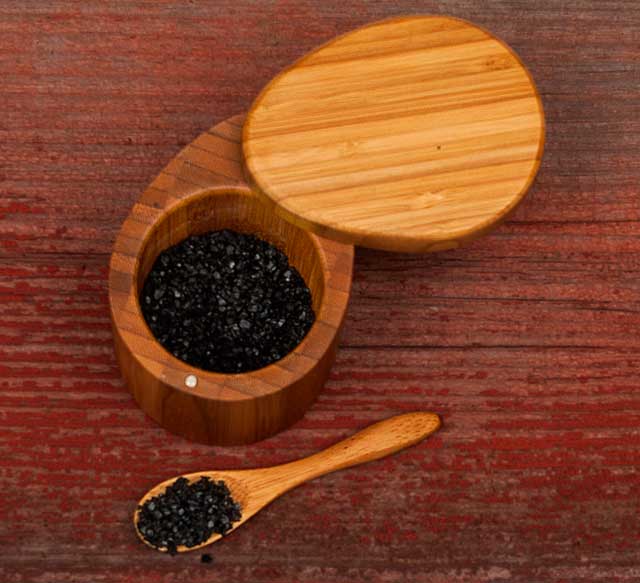 Rock Salt – this salt, such as the Himalayan pink salt, is mined from salt mines. Himalayan pink salt is known for its crystalline shape, its beautiful color and its high mineral content. A salt grinder should be used to reduce the crystals to a finer powder.  This is a good general everyday finishing salt.

NOTE: Be sure to find salt that was smoked over real wood rather than infused with liquid smoke flavor.

Salt blends – This is also a modified salt; and these are sea salts mixed with various herbs. Depending on the herbs added, they are a nice finishing salt for foods enhanced by those herbs. 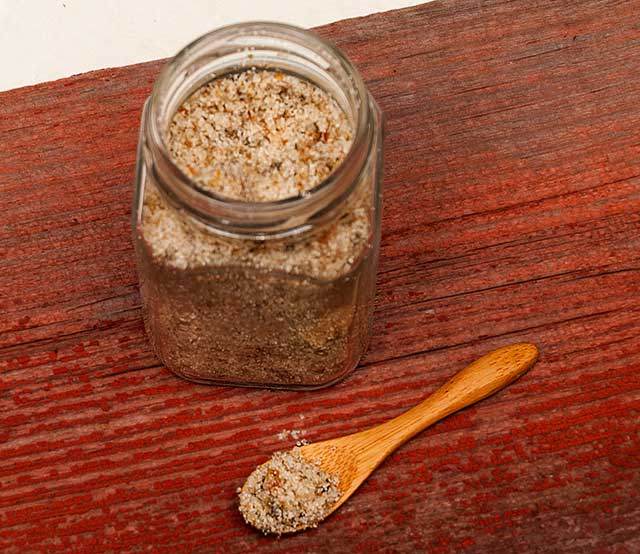 This is a salt blend consisting of sea salt, fresh lavender, parsley, red pepper and fresh sage.  It is delicious on fish and poultry.

The salt types listed above are different from table salt in the following ways:

My preparation for this post was both  informative and a lot of fun. The salt experiments tantalized my taste buds; and as long as salt is used sparingly, this mineral has transformative powers over the flavor of food.

I hope you’ll give it a try.

Here is one of the many recipes from Salted. 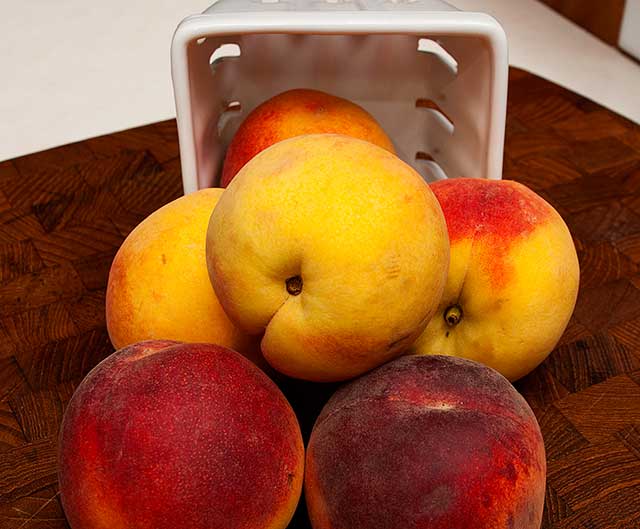 Preheat the oven to 425 degrees F.

Put the peaches, stem side down, in a baking dish large enough to hold the peaches without touching one another.

Poke each peach with a fork several times to keep them from bursting.

In a small saucepan, bring the water, sugar and cinnamon to a boil over high heat.  Remove the pan from the heat and stir in the bourbon, vanilla and butter.  Return the pan to low heat and simmer until the butter melts.  Remove the cinnamon sticks and spoon the sauce over the peaches.

Roast the peaches until they are tender when pierced with a knife, about 35 minutes.  Every 10 minutes, baste the peaches with the syrup in the bottom of the pan.  Remove from the oven and let the dish cool for 15 minutes.

Serve one peach per person, with some syrup spooned over the top.  Add a dollop of yogurt, crème fraiche or caramel ice cream. Finish with smoke sea salt sprinkled over each peach.

Enjoy this foray into the world of salt.

Patricia Rio
This entry was posted in Weekly Tips. Bookmark the permalink.